2nd Sunday Jihmye Poetry is Still On Zoom
But the Spacebar Cafe & Wine Bistro
Is Now Open to the Public
For Take-Out & Social Distance Meals on the patio.

We have tasty beverages,
including smoothies, beer, and wine.
7454 University Ave Suite A La Mesa CA 91942

Our Feature In June is World-Community Storyteller Alyce Smith Cooper 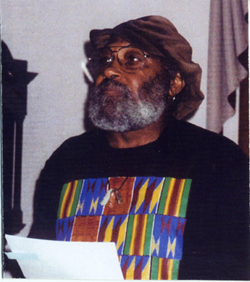 In the fall of 2010, Jihmye Collins asked me to have breakfast on a Saturday morning at the Big Kitchen, South Park’s bastion of great, abundant food, the warm, welcoming magic of owner Judy the Beauty, and clientel who mostly lean to the left as they keep the 60’s social activism alive and well..  As he enjoyed his eggs & toast he explained he wanted me to help him co-host an open mic at the only Black-owned coffee shop/deli in La Mesa, The Space Bar Internet Cafe.  We set the target date for the 4th Thursday in October, 2010. He told me he had arranged for San Diego treasure Michael Klam to feature. As I enjoyed my oatmeal, fruit, and huge warm muffin I told him I was in.
Poets get 7 minutes to recite. Musicians get to perform 2 songs.  Our feature could be a poet or a musician. A feature is alloted 25 minutes.     Any art project shared with Jihmye Collins was an exercise in cooperation, creativity, and imagination   His combined experience with the United States Army, the Black Panther Party For Self-Defense, and his Bahai Faith paved a road for his students lined with respect and innovation. In the followng months, Lizzy Wann and Bennie Herron energized the Space Bar stage as Jihmye’s and Lanetta’s art adorned the walls.
The usual suspects showed up for the open mic:  award winners, youth, elders, beginners, the serious, the outraged, the wounded, the thinkers, the feelers, the seekers of poetry community. The latter described Jihmye and I as our main reason for co-creating the gathering.  We wanted a diverse, talented community to share extremely deep creativity with one another about this beautiful and troubled world we inhabit.  We were especially interested in voices  that corporate media is shy about; voices  that inhibit the corporate world’s bottom line.  Voices that we felt many Americans and nonAmericans make audible during our day, but are denied any public vehicle by a war government and a war society corrupted by the lies of the worshippers of the god of profit.
When Jihmye passed away in March of 2011 from a stroke I was one of many who were not ready for him to be absent from our art and political scene.  His widow, Susan, the owners of the Space Bar, Frank and Patricia, and I agreed that we would continue Jihmye’s vision.  The Jihmye Poetry Open Mic would continue.  We’ve also moved to the Second Sunday of every month.  We gather from 3:00 P.M.to 5:30 P.M. We’ll read and recite on Zoom (ID: 841 4272 5900) until it’s safe to return  Second Sunday to the Spacebar.
Jihmye’s legacy and spirit will guide us in love for the spoken word and cultural respect. You bring your muse and a poem, a song, a dance, a vibe. I’ll bring energy, rhythmn, and a happiness to engage and inspire our poetry community. Just like Jihmye said. See you then.
Jim Moreno
City Heights, May 2013. 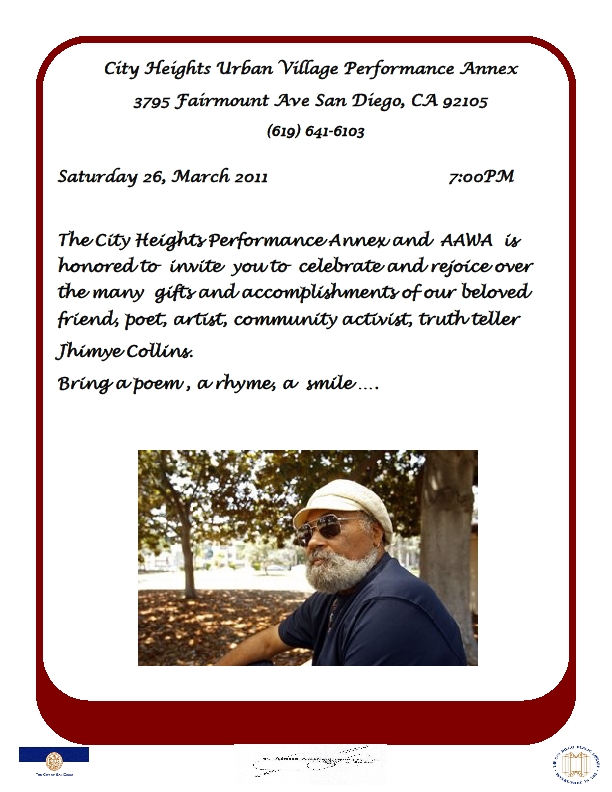 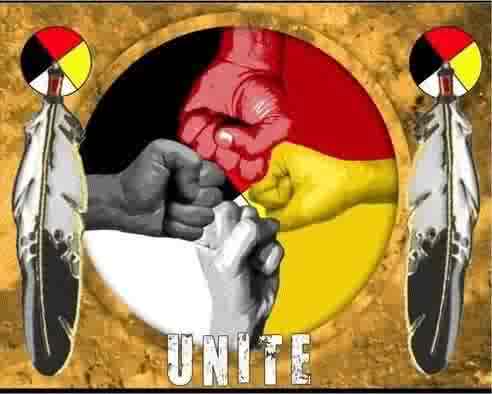