When We Create Poetry Community We Support One Another make sure you visit these venues and bring a poem to read or a pen to write.
2nd Sunday Jihmye Poetry- Open Mic
Welcome to Jim Poet.com

Our Feature is TBA 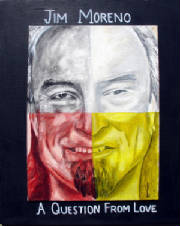 teaching poetry with Arts Education Connection San Diego since 2005.  Jim was an original member and coordinator of San Diego’s Langston Hughes Poetry Circle and a board member of the African American Writers & Artists.  Moreno was also the director of the Encanto Boys and Girls Club Children’s Poetry Choir and the Language Arts teacher at the All Tribes American Indian Charter School on Rincon Reservation.
Since August of 2005 he has served as the Poet-In-Residence for the Juvenile Court & Community Schools where he teaches poetry workshops for at-risk youth in lockups and community schools and is currently starting a new contract at the Kearny Mesa site with Mid City Community Music.
.  63 of his students have been published in the “Inbetween Places” newsletter, a publication for the homeless.  Each of those students were awarded $10.00 for their poetry. 44 of Moreno’s students were published in the San Diego Poetry Annual’s 2015 edition.   6 of his students have won first place awards in a county-wide “Poetry for Peace” contest sponsored by the San Diego Peace Resource Center.  Each student was awarded $100.00.  Publishing and award monies for his students have added up to over $1500.00 since 2007. One  student won first place in  a state-wide playwright contest.  She wrote the play in her cell in Juvenile Hall.  The award winning one-act play was performed in a local theater.  She had never seen a play before in her young life.
The 2016-2017 edition of the San Diego Poetry Annual  saw 42 of Jim’s incarcerated students have 49 poems published.  As the Regional Editor for Native American poetry, Moreno was able to help 14 Indian poets publish 20 poems.  Some of those students were enrolled at the All Tribes American Indian Charter School where Moreno first taught Language Arts in 2002.  Moreno revisited the school and facilitated a poetry workshop for the students.  Jim Moreno was voted the Arts 4 Learning Residency Teacher of the Year for the 2016-2017 school year.
Mr. Moreno has been a guest poetry teacher at St. Elmo’s Village in Los Angeles, the Heman B. Stark Branch of the California Youth Authority, Los Coyotes Reservation, Chula Vista High School, Crawford High School, The Grauer School in Encinitas, The Vista Buddhist Temple, Southwestern College, the Magee Park Poets in Carlsbad, California, the Point Loma Arts Academy, Explorer Charter School, and the CalSAC Statewide Conference.  Jim Moreno has been published in City Works, The Langston Hughes Poetry Anthology, The Magee Park Poets Anthology, the poetry conspiracy, Tidepools, The San Diego Poetry Annual, and others.
Jim has performed with The Three Deuces, a three art ensemble with jazz trumpeter Mitch Manker and dancer Michael Tompkins. He authored Dancing in Dissent: Poetry For Activism (Dolphin Calling Press, 2007).  As Jim Hornsby he serves on the advisory board of the Poetic Medicine Institute.  He recently featured with Institute president John Fox at the Encinitas Library.  He co-hosted with painter/poet Jihmye Collins (R.I.P.) of 2nd Sunday Jihmye Poetry, an open mic poetry gathering at the Space Bar Cafe and Wine Bistro at 7454 University Ave., La Mesa, CA 91942  He has read his original verse at poetry venues from Seattle to Orlando. Moreno is a Regional Editor for the 2022-2023 San Diego Poetry Annual.  Jim won first place at “The People’s Choice” poetry competition at the San Diego Art Institute in Balboa Park reciting his original poem “Strange Fruit & Other Public Executions”  He was competing with 9 other poets.
Moreno states firmly that he is proud to be an adopted member of the Smuwich Chumash tribe.  He was adopted by his brother John Moreno, a Chumash elder, painter, storyteller, and singer in a ceremony in the spring of 1995 in Lomita, California.  His mother, Rosie (Nani) Moreno was a Tohono O’dham, Pima, Mexican, Irish elder who inspired those around her to sing with life.
Jim’s birth mother, Miriam Hess, was a talented story teller, world traveler, and musician who played the piano and organ.  Moreno attributes his writing talent to the storytelling talents of his mother and his two sisters, Barbara and Sheila.  “I grew up listening to my mom and my sisters tell great stories during the day, at meals, and at night.  I left home at 18 to begin a life of collecting my own stories. That’s what you will find in my poetry.”

She didn’t cheat us!

Of course he cheated us!

He cheats on his wife.

He cheats on the Constitution.

He cheats on the border.

He cheats on his taxes.

He cheats on the election.

He cheats on (your choice here)!

He cheats in golf

He cheats in checkers.

He cheats on tweets.

He cheated hundreds of thousands

of us who died from Covid.

Seeing Takes Time: Ver Toma Tiempo by Jim Moreno Sois toda mi gente. Eres toda mi América
You are all my people. You are all my America! The border is a belt that is too tight, holding things up but making it hard to breathe. The border is a rusted hinge that does not bend. The border says stop to the wind, but the wind speaks another language, and keeps going. The border is a brand, the “Double-X” of barbed wire scarred into the skin of so many. The border, the word border, sounds like order, but in this place they do not rhyme. The border is a handshake that becomes a squeezing contest.
Alberto Rios First Latino Poet Laureate of Arizona

Seeing takes time. Slow down. La Migra, you are not seeing us. You are not listening to us. Your ears seem to be broken. The People of both nations are sacred. Look how you compress time into a few savage moments. Sound bites, shattered dreams of family love in a disjointed border. You squeeze the life from the wishes of a presidents wife who, as she dedicated this park in1970, wished for no fence to part the waves of the Pacific, she wished to plant a circle of trees rooted in both nations. So we are here to remind you, you’ve been directed to listen to community, when you listen to us, we are community. You are also listening to a president’s wife. When we listen to you we hear a creeping soulful litany of stiffness that echos from the lips of a seditious presidential pretender. We rejoice that he is now out of office and may soon be prosecuted for many crimes against democracy, against us.

Your website says you serve the American People. I’m an American person, the people here raising our voices about years of your empty promises are American persons. You are not serving us. Closing Friendship Park for the past 2.5 years is not serving the wishes of Pat Nixon as you push this spit in our faces 30 foot fence. You detained a prince of peace for accepting a business card through the fence. Made him kneel on his knees with his hands on his head for a business card? We have photos too you know… You have bulldozed and destroyed our Binational Friendship Garden and said what? You said Whoops? Did you ever apologize to Dan Watman for any of your limitations? Your myths hold no words, Choiceless awareness means nothing to us.

When I served our country in Vietnam I was in the rivers of the south, I survived mortar and rocket attacks before you were born. I served my country in harms way in far better ways than you are serving me or us with this petty attempt to implement policies of a seditious disgrace posing as a president with his car of clowns and his misassigned, mendacious kangaroo court.

You are far from the integrity and patriotism of the bipartisan January 6th committee, you are far from the honor and bravery of Mr. Pottinger, Ms. Matthews, Ms. Hutchinson, Officer Edwards, Shay Moss and her mother Lady Ruby. But there is a way to close that gap between us…

Poetry says Mexican, You say Mexican’t, Mexican’t visit peacefully with each other at Friendship Park.That does not serve us. It’s not spelled that way. Let’s begin to amend our troubled history with you, tomorrow. Let’s all of us together create unity, magic, and art at La Frontera: the unity of one heart, one mind, the magic of the fresh air of freedom, and the art of flexible diplomacy over the stiffness of bureauacracy.

Poet Alberto Rios wrote: The border is mighty, but even the parting of the seas created a path, not a barrier. This poem today is about your duty tomorrow to empower the letter and the spirit of the law, not to tell us what you’ve decided, but to work with our voices and our wishes, our community, as part of your policies of protection, to respect our lawfully elected current president who ordered a stop to all border wall construction, & you… refuse to revive the specter of the Berlin Wall in our land of the Americas, you… help create a path of unity where we help you to protect & serve American persons, and you help us create a culture of friendship and respect that protects all humanity, all colors of skin, here at the playas.

We consider your 30 Foot Border wall passive incarceration. This is the land of freedom Somos Uno. Somos Uno. Mañana, le daremos la mano. ¿Nos darás la mano y no exprimirás la libertad?Tomorrow, We’ll shake hands with you. Will you shake hands with us and not squeeze freedom?

37 laws were waived in construction of walls around Friendship Park! Waived is a nice way to say ignored, circumvented, or broken. We say these laws were broken because they protected flora and fauna, MotherEarth, birds, animals, AKA our relatives. Who made the decisions, 37 decisions,to ignore protecting endangered species and the land. Let’s follow the money…We are not going away and more are joining us in stopping this 30 foot blight on our freedom to peacefully visit our neigbors in the South. The archaic root of circumvent is deceit.